Graphite Miners News For The Month Of June 2020

I do much more than just articles at Trend Investing: Members get access to model portfolios, regular updates, a chat room, and more. Get started today »

Welcome to the June edition of the graphite miners news. June saw graphite prices only slightly higher and plenty of good news; notably from some of the smaller graphite producers and juniors.

During June, China graphite flake-195 EXW spot prices were up 0.23%, and are up 8.3% over the past year. Note that 94-97% is considered best suited for use in batteries; it is then upgraded to 99.9% purity to make “spherical” graphite used in Li-ion batteries. 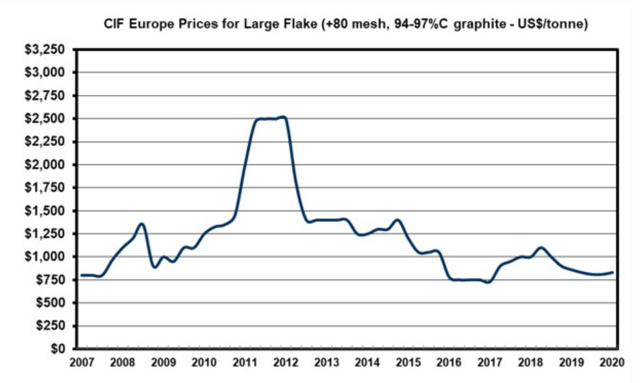 "Our cells should be called Nickel-Graphite, because primarily the cathode is nickel and the anode side is graphite with silicon oxide."

In my January 30, 2018 Trend Investing Interview with Benchmark Minerals Simon Moores, he said about graphite:

"Spherical graphite anode plants, predominately based in China, were traditionally 5-10,000 tpa but now we are tacking four megafactories are looking to produce 60,000 to 100,000 tpa from 2020 onwards."

"Global steel demand to drop 6% in 2020 due to Covid-19, Worldsteel says. Global demand for steel will decrease by 6.40% year-on-year in 2020 due to the effects of Covid-19 pandemic lockdown measures."

"Electric vehicle rally to maintain demand for battery metals despite Covid-19. Although subdued as a result of Covid-19, demand for battery metals, including cobalt, lithium and copper, will remain strong as a result of growth in the global electric vehicles [EVs] market, business intelligence company CRU UK cobalt, lithium and battery markets senior analyst George Heppel said this week... However, Heppel pointed out that, interestingly, although the automotive market as a whole had been hit hard by Covid-19, the EV sector had actually had a few good months, all things considered."

"Pre-loaded silicon anodes boost lithium battery density by 25 percent... swapping the graphite for silicon, which can store four times the amount of lithium ions, could lead to phones that last for days or cars that travel hundreds of miles further on each charge. But working silicon into a lithium-ion battery that makes the most of this potential has proven problematic. One of the ways that this could be overcome is through a technique known as “lithium pre-loading." Rather than adding lithium powder, the team submerged the silicon anode in a special solution for five minutes, which triggered a chemical reaction that sees electrons and lithium ions seep into the electrode. A test battery constructed with the silicon anode was shown to have an energy density 25 percent higher than a comparable commercially available battery with a traditional graphite anode. The team says this technology has the potential to increase the range of electric vehicles by a minimum of 100 km (62 mi) on average, and would be fairly easy to implement for large-scale processing."

"Simon Moores: US domestic supply chain build out “far too slow”. “It is not too late for the US, but action is needed now,” Simon Moores of Benchmark Mineral Intelligence told the US Senate on Tuesday. “A new global lithium-ion economy is being created,” Moores said. “Yet any US ambitions to be a leader in this lithium-ion economy continue to only creep forward and be outstripped by China and Europe.” Looking at the raw materials needed to supply that lithium-ion economy, Benchmark Mineral Intelligence forecasts that by 2029, demand for nickel will double, while demand for cobalt will grow by three times, flake graphite by four times and lithium by more than six times."

I have not covered the following graphite producers as they are not typically accessible to most Western investors. They include - Aoyu Graphite Group, BTR New Energy Materials, Qingdao Black Dragon, National de Grafite, Shanshan Technology, and LuiMao Graphite.

Syrah Resources Limited owns the Balama graphite mine in Mozambique.

You can view the latest investor presentation here, and the Chairman's May 2020 AGM address here.

Ceylon Graphite has 'Vein graphite' production out of one mine in Sri Lanka with 121 square kilometers of tenements.

"Ceylon Graphite announces first commercial sale of 95-97% natural graphite. Ceylon Graphite Corp. is pleased to announce its first sale of graphite from its wholly owned subsidiary, Sarcon Development [PVT] Ltd (“Sarcon Development”), since the commencement of commercial production in December 2019. The sale, which was for 1 ton of vein graphite with Carbon content of 95-97%, was to 2D Materials Pty Ltd (“2D Materials”) of Singapore. 2D Materials purchased the graphite to evaluate it for its graphene production needs. The shipment is expected to ship immediately... "This is the next step in accelerating our production rate to enable us to fulfill the needs of multiple customers.”"

"Ceylon Graphite enters Korean market. The sale, which was for 300 kgs of vein graphite with carbon content of 95-97%, was to Elves Graphite Co, Ltd of Seoul, South Korea. The graphite was purchased to evaluate its suitability for battery manufacturers and other industries who use high-grade graphite in their manufacturing processes in South Korea. The shipment is expected to ship immediately. “...We hope we will see sizeable orders shortly.”"

Skaland Graphite is 90% owned by MRC. Skaland is the highest grade flake graphite operation in the world and largest producing mine in Europe, with immediate European graphite production of up to 10,000 tonnes per annum with regulatory approval to increase to 16,000. MRC owns 90%.

Magnis is an Australian based company that has rapidly moved into battery technology and is planning to become one of the world's largest manufacturers of lithium-ion battery cells. Magnis has a world class graphite deposit in Tanzania known as the Nachu Graphite Project.

The Black Crystal Project is located in the Slocan Valley area of British Columbia, Canada, 35km West of the city of Nelson, and 70km North of the border to the USA. The quarry and plant areas are the project’s two main centers of activity.

Battery Minerals core commodity targets are graphite, zinc/lead and copper. BAT is maintaining a focus on its two graphite development assets Montepuez and Balama which are located in Mozambique.

Mason Graphite is a Canadian graphite mining and processing company focused on the development of the Lac Guéret project located in northeastern Quebec, where the graphite grade is believed by management to be among the highest in the world.

No significant news for the month.

Triton Minerals Ltd. engages in the acquisition, exploration and development of areas that are highly prospective for gold, graphite and other minerals. The company was founded on March 28, 2006 and is headquartered in West Perth, Australia. Triton has three large graphite projects in Mozambique, not far from Syrah Resources Balama project.

On June 22, Triton Minerals released: "Developing world-class projects for the graphite revolution. Positioned to utilise its first mover advantage in one of the fastest developing markets globally."

You can view the latest investor presentation here and an excellent video here.

NextSource Materials Inc. is a mine development company based in Toronto, Canada, that's developing its 100%-owned, Feasibility-Stage Molo Graphite Project in Madagascar. The Company also has the Green Giant Vanadium Project on the same property.

On May 27, Talga Resources announced:

"Vittangi Project supported by national interest demarcation. Battery anode and graphene additives company Talga Resources Ltd. is pleased to advise of positive developments at its 100% owned Vittangi graphite project in northern Sweden (“Vittangi”). A recent decision by the Swedish Geological Survey (“SGU”) completed the demarcation of Vittangi as a mineral deposit of national interest. This designation adds support to consider the exploitation of Vittangi as a mineral deposit when government authorities review development plans and any potential competing land uses."

SRG is focused on developing the Lola graphite deposit, which is located in the Republic of Guinea, West Africa. The Lola Graphite occurrence has a prospective surface outline of 3.22 km2 of continuous graphitic gneiss, one of the largest graphitic surface areas in the world. SRG owns 100% of the Lola Graphite Project.

On May 25, SRG Mining Inc. announced:

"SRG Mining signs additional offtake agreement bringing total sales to 85% of production. The Company has recently signed its 5th offtake agreement for 10,000 tonnes per year for a three-year period. This brings the total signed off-take agreements to 128,000t over three years. These agreements represent approximately 85% of the Company’s anticipated production over that period. Our clients operate in various markets including refractories, expandable graphite and battery anode material. We remain actively engaged with several potential clients to continue to sign off-take agreements for our graphite production. The Company continues to believe in signing sales agreements for the anticipated production and having many potential clients test and qualify our material. These efforts will remain ongoing throughout the life of the Project."